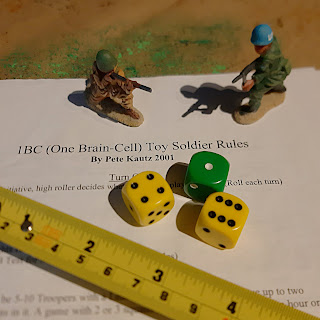 The 1 BC (One Brain Cell) Toy Soldier Rules by Pete Kautz, can be found on his website or directly downloaded. Note that the range for the HMG on the website is too short, but on the download its correct with 36". 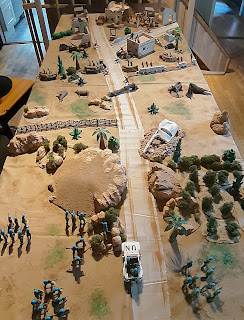 Time:    2,5 hours
Turns:   12
Result:   UN victory
Since these rules doesn't include vehicles, I just let the UN-Jeep act as part of the scenery and cover and a static emplacement for the UN HMG. This time I kept the UN-support weapons on the left side of the table, and let the UN forces advance towards Lumbaya through the dense vegetation.
The UN Forces lost their HMG support in turn 1, and that slowed the advance until the the Katangese HMG was finally taken out in round 12 (!). The mortar did'nt provide much support either as it missed it targets every time (!)
So the UN-troops just had to advance slowly by 'Fire and Maneuver', getting closer to the village a little at time.


In turn 12 the UN-forces had entered the village of Lumbaya with 2 reduced squads, and taken control of the few remaining Katangese there, who all were either dazed, stunned or unarmed. 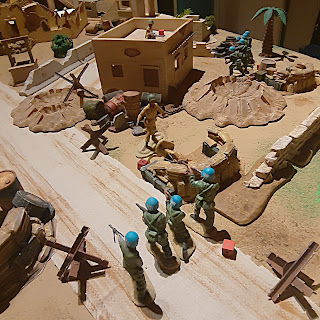 This is like the names indicate, a very simple game. Still it's interesting enough. Therefore it might be a great introduction for new members to wargaming. It was the first wargame I ever played with miniatures.
Maybe it was a lot of bad die-rolling here, but I think these rules make it slightly harder to hit and kill the targets by any weapons, and especially by support- and automatic weapons, than the previous rules I've been previewed so far. Since the casualties also get to roll for a saving, the mortality is not so high, so you don't loose all your troops early in the game, but it pins down units though. I played the exactly same game and scenario again with my oldest son a little later, and got about the same result the second time as reviewed here.
Please follow this blog for even more AAR on free wargame-rules to come...
at June 26, 2022