Fog of war in wargames

During battle-conditions there exist a 'Fog of War' due to consealed units and consealed movement of units, which make a complete overview of the battle impossible. This also makes it difficult to make plans ahead, as all enemy positions may not be known. It's said that no plans survives the first encounter with the enemy. Usually when we're playing wargames we automatically have a pretty good overview of the whole battlefield, as we're usually playing on a table or similar, and usually we can see all the enemy units too. Some units may be in cover or behind obstacles, and the different units may therefore not see each other, but the players know they are there, and what kind of unit it is, and it's strength etc.

Fog of war in miniature

There are several ways to incorperate 'The Fog of War' into a miniature wargame and make it even more challenging. Some simply write down a unit's size and whats in it on one side of a small piece of paper, and a unit-number on the other. Then the pieces of paper are laid down on the gaming-table with the unit-numbers "facing up" and the unit's data "facing" the table, and are moved around at the 'speed' of the slowest unit in that numbered unit on the note. This way the players know that there is "something or someone there", but not the exact size or type before it gets in line of sight or close enough to bee seen by other units. When such a unit comes in the line of sight of another unit, they are both exposed and the papernotes for those units are flipped and replaced with the gamingpieces of those units, which are then placed on the battlefield. 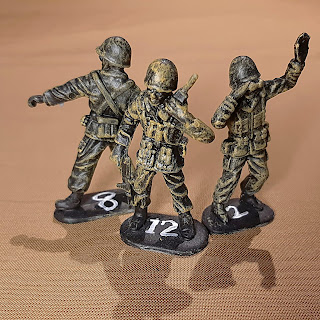 Instead of small papernotes with units numbers, there are another way to move such miniature 'ghost units' around the miniature battlefield. I got some figures left after the army-building from the Tobar-sets reviewed earlier, and decided to use some of them as 'ghost units'. I painted them all solid black, and drybrushed them with khaki. On their stands I painted different numbers, which will go to a reference-note made by each player before the game begins. On such a reference-note each player writes down what kind of unit, size etc. a numbered figure represents. When one such figure are spottet by another or by another enemy unit, the unit (s) is revealed , and all its miniaturesare placed on the battlefield. 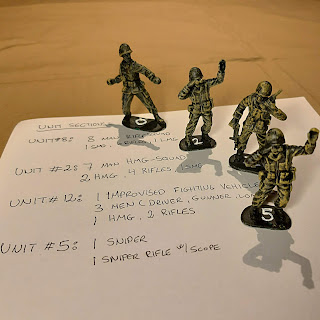 Now reconnaissanse units will become usefull in your wargaming, as they will help you to get a better overview of the battlefield and what to expect. This way of adding 'The Fog of War', can be used with a lot of both free and comercial rulesets, eventhough they do not specify a Fog of War"-element in their rules.

Tired of army men loosing their paint? Perhaps you have experienced that your Army men  starts to loose their paint after a while, and ... 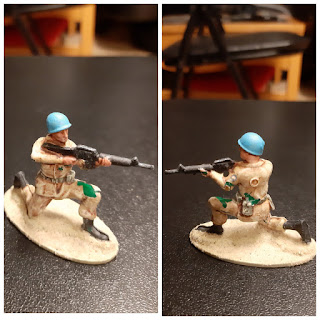