Once Upon a Dice in the West - Edition 3 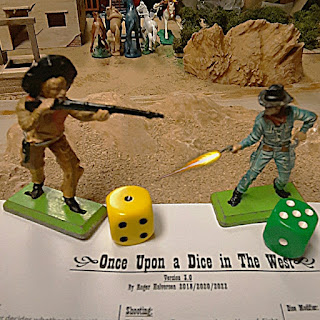 I really like 'Westerns', and a couple of years ago I wrote my own 'home brew' I called 'Once Upon a Dice in the West'. I've been playing it, and like the rules it as it gave a narrative game and a kind of cinematic feeling of a 'Western'. I've played so many other games since then, and I wanted to upgrade my 'house rules' with mechanics found in other games to it, and trying to get the whole thing on one page as well (as I'm also a fan of one page rules). So Once Upon a Dice in the West is now in it's 3rd edition.

I recently played Thor Sheil's OMOG - One Man, One Gun 19c with an Old West scenario, and wanted to try it out the same scenario with my recent version of 'Once Upon a Dice in the West'.

The scenario was vaguely inspired by the Dalton gang's robbery i Coffeyville in 1892; An Outlaw gang had to tie their horses slightly away from the bank, while a couple of the gang-members looks after them while the other members rob the bank. Can they rob the bank, get back to their horses and leave the town without getting caught??

Playing the same scenario, I decided to use the same forces; 2 members of the gang are watching their horses while 4 other gang members has gone for the bank. These have been recognized on their way to the bank, so the town sheriff and 2 of his deputies are alerted and also on their way to the bank. 4 citizens have armed them self, and are ready to try to stop the robbers from stealing their savings. A small Army-detachment of 2 is also located in the outskirts of the town. Once Upon a Dice in the West is not entirely based upon 'units', but on 'characters' as well. I treated the Army-detachment as a 2-man unit, and all the others as characters. The Sheriff and one of the robbers I made 'special characters' just to give them more skills and advantages in gun-fights.

The outcome of this skirmish was not so different from the shootout I based this scenario upon.
I had a great time with my childhood miniatures, and the game lasting only 7 turns.
I provide the Once Upon a Dice in the West - version 3 here on my blog, so you can have a try at it as well if you'd like to. Please feel free to post your comments or experiences here if you'd like to.
Link: Once Upon a Dice in the West version 3

at January 25, 2023
Email ThisBlogThis!Share to TwitterShare to FacebookShare to Pinterest

Blogs I really recomend you to visit:

Wargames you can play for free:

Holiday Wars Many games claims to be 'Beer and Pretzels games', but with this theme I think this is a 'Chrismas brew and cookie ... 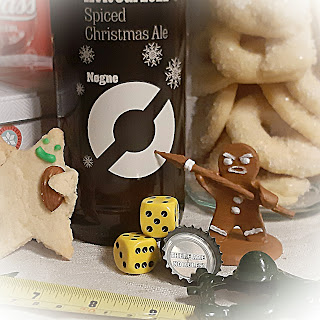